This week at Callaway Golf Europe, we’re all delighted with the news that we’ve maintained our position as Europe’s #1 Hard Goods and Ball Brand for the calendar year to date. This success has been built on the combination of great performing product, outstanding support from our partners, plus visibility and success on Tour… and this weekend was no exception.

At the Italian Open and the U.S. Women’s Open, the Callaway product range was again leading the way. Rogue Sub Zero was the #1 Driver Model in Italy (with Rogue Standard #2) while, across the pond, Rogue was #1 at Shoal Creek with an impressive 47 models in play.

Following yesterday’s final qualifiers for the 2018 US Open in eight days‘ time, we have several more Callaway Staffers in the mix hoping to seal a Major victory (including James Morrison who headed qualifying from Walton Heath).

As well as topping the model count in the Drivers category, Rogue was also the #1 Fairway Wood Model at Gardagolf CC, while our new X Forged UT and X Forged ’18 Irons captured the #1 Irons and #1 Utility Irons categories.

Over on the LPGA Tour, Callaway was the #1 Driver Model and the #1 Fairway Wood Model at the U.S. Women’s Open. Incredibly, of the 47 Rogue Drivers in the field, 40 were used by non-staffers who chose to play the model based on its performance alone.

The Callaway Rogue Drivers have proven themselves on Tour, with Staffers Phil Mickelson, Michelle Wie, Sergio Garcia, and many others, finding the winners circle in 2018. But how does Rogue perform against its competition for the amateur golfer? GolfWRX and MyGolfSpy put that to the test in their 2018 Fitters Choice, 2018 Member’s Choice and Most Wanted Reviews features, and these are some of the highlights:

Odyssey continues to dominate across the worldwide Tours and, this weekend, it was the #1 Putter Brand on the European Tour and LPGA Tour. It was at the U.S. Women’s Open at Shoal Creek Golf and Country Club where Odyssey really stole the show though, finishing 1-2-3 at the top of the leaderboard. 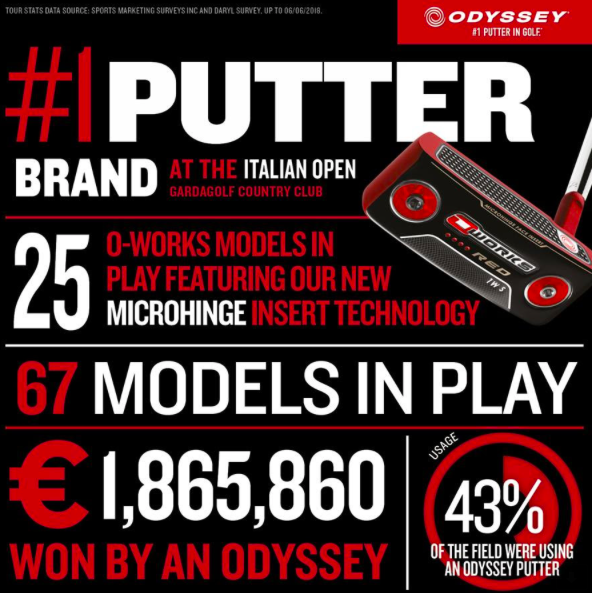 Back on the European Tour, Odyssey also maintained its status as the #1 Putter Brand on Tour with 43% of golfers choosing to put an Odyssey flatstick in the bag.